To be honest, lately, Singapore's television programs way better than ours. Luckily as I live in Riau Island Province, I can watch all of the channels only by using common television antenna. Some of the show, which I had missed,  I watched streaming on Toggle, a website that providing the catch-up of most of the Singapore's Media Corp Television Show.

One of my current Favorite Television Show is Tanglin. It airs on Channel 5 at 19.30 WIB (8.30 pm) for 30 minutes on weekdays. As I post this blogpost the show already aired for over a year with 270++ episodes. Why it's become my favorite? The story centered in 4 families, The Tongs, The Lims, The Bashkars, and the Rahmans, with multiracial and multi-generations in Tanglin Area as their daily life basis. The interaction between and their problems can be complex with ups and downs side of every body involved but feel simple and sincere, something that I really missed from our Indonesian television show. The airing time is also convenient for me, right after Isya. And the duration, I only should watch for 30 minutes or less per episode. Then, if  I missed an episode, I could watch the rerun at 23.00 WIB (10.00 pm) and 12.30 (11.30 am) the next day or in toggle (now : mewatch) for catch up. Also they are some webisode (spin-off / extra) like Jay's recipe, some flash back story, or some story focusing at some people only.

Even the set is a custom build in a studio, which I read budgeting over 1$ million, I still can feel the vibe of Singapore nature. The small size of the room even for the very wealthy Family, the use of simple furniture to extend the room's space and to the cleanliness and tidiness. Of course their Singlish (Singapore English) sometimes also made me laugh, for example, the word "kepo" and Salmah extensive used of Malay language in her daily conversation.

The Tongs
The largest family,  with Chinese heritage, middle class working family that consist of :
Tong A Biao : An elderly taxi driver, His grandsons / grand daughter used to call him Ah Kong. A nice and friendly man. Bond a special relatioship with Miss Pariera
Tong Li Yan : A widower, with 6 children 4 boys and 2 girls (4 kids are his late husband's, Robert and his first wife, 1 biological son with Robert, and 1 daughter with dr. Baskhar), Salmah Rahman BFF and former lover of dr. Bashkar Ram, running Tanglin Coffee House (TCH).
Tong Adam : First son, hot-tempered, Married to Lim Xue Ling and father of Michael and Mellissa, owner of a MMA Gym, living in the Lims family flat, used to be a stay at home dad, still figured it out how to fix his and Xue Ling's strained marriage.
Tong Ben : 2nd son, Vanessa's husband, legal (but proven not biological) father of Grace, work in TCH, Sulaiman's BFF, back to love relationship with Gina.
Tong Chris : 3rd son, married to Suzzanne, an ex-employee of KS Food, had to jail for 2 weeks because he faked his degree, work for Adam's Gym, Arjun Baskhar BFF, Diana's twin brother
Tong Diana : the tomboyish daughter, currently in relationship with Lim Jun Kai, former girlfriend of Arjun Baskhar, an enterpreneur with "Help is Here", also Chris's twin sister.
Tong Eddie : the 4th son, the only son of Li Yan and Robert, family clown. currently in National Service, former classmate of Michael and Shruti Baskhars.
(As the series progress, they are some new family members)
Grace :  baby daughter of Ben and Vannesa

Suzzanne : Chris's wife, they've been together since high school, ex-KS food employee, a yoga teacher in Adam's Gym
Vannessa : Ben's ex-girlfriend turned wife because of her pregnancy, mother of Grace, an unstable woman, recently movimg out the Tong's unit after Gina found out that she manipulate everyone about Grace.
Tanya Jasmine Clark : Long lost daughter of Li Yan and Baskhar, her adoptive parents live in Hong Kong, meanwhile she used to live in London, very strong woman, a lawyer and a single parent Joy.
Joy Clark : Tanya's daughter with some health issue (cerebral palsy), a smart and friendly student of Tanglin JC, Amir's classmate,  bond a strong friendship with Shruti and Ah Kong.

The Lims
The moderate wealthy family with Chinese heritage that in the beginning of the story owned a legendary Soy Sauce manufacture company KS Foods, Pte, Ltd, but forced to sold it to Peter Tay along the way, consist of :
Lim Kwong San : Very stubborn patriarch of the family, currently in retirement but joining Jun Kai in a healthy catering business.
Lim Bee Li : the wife of Kwong San, mother of Xue Ling and Jun Kai, an avid seller, very bubbly and funny.
Lim Xue Ling: the wife of Adam Tong, mother of Michael and Melissa, used to work in KS Food, now running her own cosmetic business: Xue Oganics.
Lim Jun Kai: known formerly as Jay, a chef and helper in TCH, former fiancee of Sheila, currently in a relationship with Diana Tong.
Tong Michael : the grandson, suffered from a car accident, currently in National Service.
Tong Melissa : the granddaughter, an anorexia survivor, classmate of Kalila
Wati : an Indonesian maid

The Rahmans
The middle class working family with Malay heritage, their late father Abdul Rahman was former founder in KS Foods and they used to help the Tongs Family long time ago, also the late first son Nasir, consist of :
Salmah : the bubbly widower, working in dr.Baskhar clinic, BFF of Li Yan
Nadiah : a single with degree in psychology, was in relationship with Wafiq, In the beginning of the story she was very curious about their father and Lim Kwong San history. After all tge past revealed, she left for London. Recently got engaged of screen with her old classmate, Asraff
Noorleena / Leena : the wife of Sulaiman, mother of Rayyan, work in dr. Bashkar clinic. Very childish but also kindhearted, Diana BFF
Sulaiman / Man : the husband of Noorlena, father of Rayyan, Ben Tong BFF, a firefighter who also back to college. He's an adopted son who recently make amends with his birth father, Hassan and accepting his new family. A funny and friendly guy, even made Pam growing romantic feeling towards him.
Rayyan  : the  baby son of Sulaiman and Noorleena, he's so cute!!
Amir : Salmah's nephew, a teenager with dyslexia, full of hatred towards his parents divorced, a classmate of Joy in Tanglin JC, an MMA prodigy, living with the Rahmans after moving from Kuala Lumpur.
Izzy : Salmah's niece, Amir's sister, a high-tech expert, have a crush in Wafiq.

The Baskhars
The very wealthy family with Indian heritage, moving back to Singapore after spent some years in India, consist of :
dr.Ram Bashkar : a doctor, former lover of Tong Li Yan and has a daughter together,  own a medical clinnic.
Meera Baskhar : the wife of Baskhar, mother of Shruti and Arjun, now help Joel in SMW, a social organization that help foreign workers.
dr.Arjun Baskhar : an arrogant surgeon, former boyfriend of Diana Tong, now a cancer fighter. A little bit annoying man who loves his family and still loves Diana secretly.
Shruti Baskhar : a trendy and former famous blogger, Eddie and Michael classmate, and currently a collage student, Pam BFF and Shawn's girlfriend.
Lathika : an Indian maid, Wati BFF

Sound very confusing? Actually no, as the chart shown. It's a huge circle of relationship. hahahaha. Even they are huge cast, very easy to find out the connection between them after watching few episodes. The cast mostly adorable and really fit their characters.

The show stroryline tell some realities that happened in Singapore and particularly Asian country. As I remembered in one episode, when Wafiq came late in a meeting with Felicia and Xue Ling, they discussed the heavy traffic jam! Hoahahhaa.

Some of the arcs also very relateable fo me, such as the struggle of Xue Ling as the first daughter to gain her father trust to run the company; the matchmaker mother, Meera who always try to hooked up Arjun with her choice; the struggle of Shruti as new student to fit in and always face bullying even cyberbullying; the rift sisterhood between Nadiah and Noorlena; the cultures and traditions gap between parents and their childern, exectra.

Overall, I give this show an eighth point, for the cast, storyline, setting, directing, editing and everything else. I also recommend it as a fun way to practicing English for an Asian. Because for some of the cast, English also their second language but they can pronounce it perfectly still not as hard to follow as the native one.

PS. pardon my English grammar and I love to share a twit form Channel 5 as my tweet's replied. 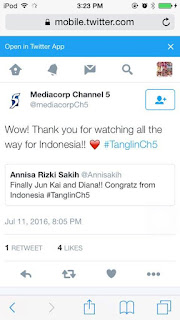 7 Fun Fact about me

Beauty and the Best

[How to] Membuat Kliping Resep Makanan